Bliss Out is a happening bar located in the backstreets of the infamous Kabukicho section of Tokyo. “Happening bars” are basically swinger clubs where men and women meet to socialize and have sex together in a semi-public setting.

There are several happening bars in Japan. Some are foreigner friendly but only if the foreigners in question can speak Japanese. Since most of the customers are local this is meant to allow for conversations between customers and insure against any misunderstandings.

Bliss Out is one of the few Happening Bars that is completely foreigner friendly and it even has a man on staff who can speak English fluently. Because of this the bar does see its fair share of foreign customers though Japanese locals also show up with regularity. 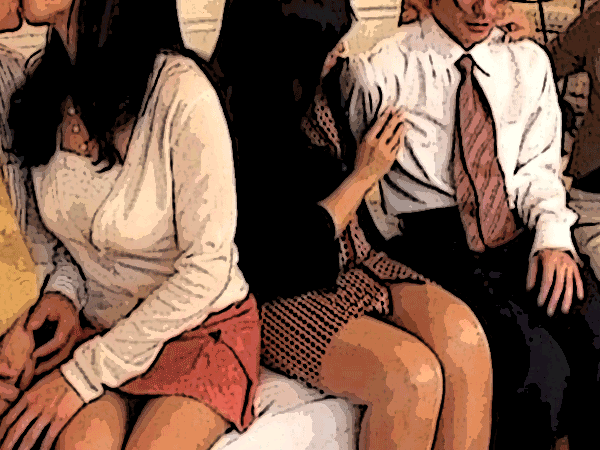 In an effort to shield itself from too much publicity the actual Bliss Out location is not marked by a sign of any kind even though the place does maintain a website. It is still not too difficult to find. The door is down a flight of stairs and although it doesn’t have any signage the presence of things like an umbrella stand, motion sensors and CCTV cameras indicate that something is going on inside.

Once customers ring the bell next to the door they are let into a small lobby area where they are greeted by either a man or woman on staff. The man was previously mentioned. He is in his twenties or thirties and can speak English very well. There is also a woman in her twenties who can speak some English that sometimes works this area. There are some other employees but these two seem to be the most prominent.

Returning customers show their membership card and pay an entry fee. They then put their shoes in a closet. After that a second door is unlocked and they are allowed into the main bar area.

New customers are asked if they know what a happening bar is. If they say yes and ask to enter they are given a membership form to fill out asking for a name, address, phone number and nickname for the club. The forms are available in English and Japanese. The addresses and phone numbers written on these forms are not verified but the names are checked against some form of identification. Customers without identification are fact not customers at all since they are not allowed to enter.

Once customers do enter the bar they are free to move around and mingle. First timers are given a tour by someone on staff. Return customers can simply put their things in one of the lockers in a side room and then do whatever they’d like.

In a back corner there is a rest room. Next to that is a locked door that leads down a flight of stairs to the basement. Customers have to ask someone behind the bar to temporarily unlock the door if they want to go downstairs. When they come back up they can simply unlock the door themselves from the inside.

The basement area is specially designed and intricate. It contains two play spaces and much more. The smaller play space is filled with mats. It is accessed through a black curtain. Next to the curtain is a one way window that allows people outside to see into the play area without any inside being able to see back out. Below that window there is a large open grate that also allows people to see inside.

Across the way there is a much larger play area with a similar layout. The floor is covered in mats. The walls around the area are open to peepers. In the back behind a curtain there is a large grated wall where people can look inside. On another wall there are several booths behind curtains. These allow people to look into the play area while also maintaining some privacy for themselves.

While play is permitted in every part of the bar except for the staircase the main action usually happens in the specialized play spaces downstairs. That said it is not unusual to see women in their bra and panties being spanked in the main bar area.

A full range of people visits Bliss Out though some nights are a lot quieter than others. Most of the visitors seem to be in their thirties though people in their twenties and forties are not uncommon. Much older people are not as common but they do show up at times.

Bliss Out apparently does screen customers somewhat though it is difficult to tell who exactly is kept out. Single men are permitted though there are restrictions against large groups of guys coming together.

There are various prices at Bliss Out. New customers pay a one time 5000 Yen ($44 USD) membership fee. After that admission fees are based on whether customers come alone or as couples. Couples pay less than single men. Single women pay nothing at all. A 3000 Yen ($26 USD) fee can be paid by customers to get a free flow of drinks during their stay or they can simply buy their drinks one at a time. The first drink is free and non-alcoholic drinks are free all the time. Any tabs accrued by customers are paid on the way out at the bar.