Moon Love (月の恋), not to be confused with the Japanese drama of a similar name, is one of many of the Chinese massage parlors in Tokyo that straddles the line of what is and isn’t actually permitted in Japan. As is the case in other countries with more repressive atmospheres the Chinese massage parlors in Japan pose as regular massage shops but often often a lot more than back rubs.

The Moon Love shop is located on a main street that connects with the large and busy Ikebukuro Station. It is well advertised with an illuminated sign out on the street displaying the name of the shop in Japanese, some prices that don’t necessarily correspond with the rates charged inside, and a picture of a Chinese model who appears nowhere within the walls of the facility. 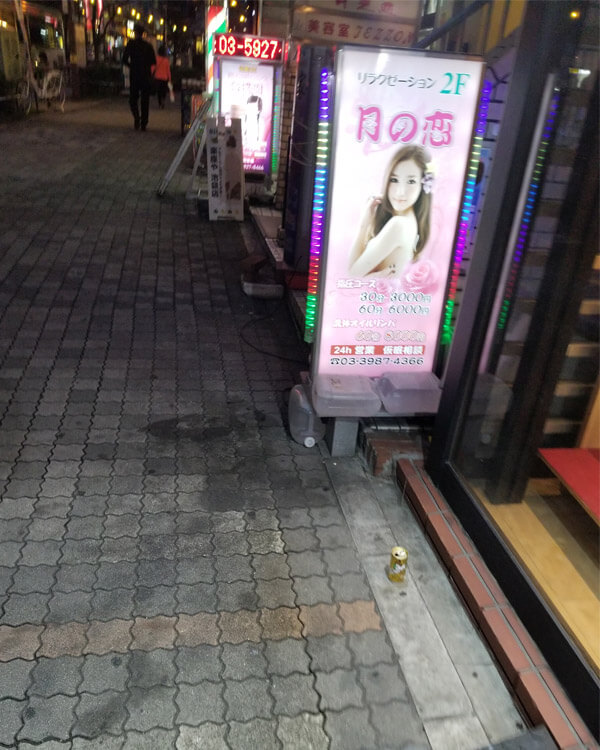 Customers access Moon of Love by going to the second floor and ringing the door bell in front of the shop. The door is impossible to miss as it is surrounded by Christmas lights. The door is kept locked at all times except when customers or staff are coming and going. That is normally a sign that something more than stretching is happening inside and Moon of Love is no exception.

After customers enter they remove their shoes and sit in one of the two available seats. They are then offered tea and shown various menus offering all sorts of courses. The most common course is a 60 minute session with body wash for 10,000 Yen ($88 USD).

Once customers select a course they pay for their session and then get led to one of several booths. These cubicles are large and clean with floor level mattresses covered by heated pads. There are also things like clocks and ashtrays inside. The walls do not go all the way up to the ceiling though they are sturdy.

The women who work at Moon of Love are from the Chinese mainland. They are in their thirties and forties. Most men would probably say that they are of average attractiveness at best. They wear revealing clothes that show a lot of cleavage and usually expose their panties from both front and back.

Being from mainland China the women at Moon of Love are obviously able to speak Mandarin. They can also speak Japanese. Few can speak any other language including English but they all carry smart phones with Google translate and they know how to use it

The women who collect money up front are not always the women who massage the customers. Sometimes one woman will take the money and then return to a customer or do something else in the back. Since all women are similar in level of attractiveness this is not a “bait and switch” scam. Rather it is the logical outcome of a place with a few women on staff but a steady flow of customers.

After customers are led to their cubicles they left alone for a few minutes. During that time they are expected to strip out of their clothes and put on a provided double breasted robe. The robes are clean and seem to be laundered between customers.

After customer change into their robes they wait for their service provider to appear. During that time they can usually hear sounds including conversations bouncing off of the walls. More often than not they can also hear passionate moans and groans of men and women that reveal some of what happens in this massage parlors and a lot of others like it.

The women who work at Moon of Love sometimes act coy with new customers and ask questions like “where do you hurt?” This is their way to break the ice and figure out what kind of services customers are looking for.

A normal one hour session includes a brief massage that is followed by a short trip to the shower room. There customers lay down on a table shower where they are scrubbed down from head to toe with special attention paid to the backside and private parts. After that they are dried off and led back to their cubicle where they receive a mediocre body massage followed by a lubed up hand job.

More may be offered to certain guys at certain times but it is not an official service or even a sure thing. When additional services are offered they almost always come with an additional cost requirement. Repeat visitors and regulars are more likely to get extra services than first time visitors though there are no real rules in that regard since it is all technically against the rules anyway.

Moon of Love. 2 Chome-18, Ikebukuro, Tokyo, Japan. Open every day from Noon to Midnight. Click here for a map.