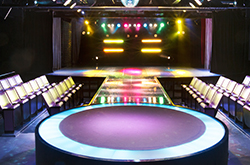 Toyo-Show Theatre in Osaka bills itself as the largest strip theatre in Western Japan with a capacity of 129 seats. I won’t dispute the claim and I didn’t count the seats, but it’s pretty large. I visited in winter and the heating was full on – understandable if you expect your strippers to be naked for any length of time!

Entry is very cheap (by Japanese standards) at 3,000 yen, with a 500 yen discount after 9.45pm. Drinks are 500 yen and, depending on your entry time, you may get a drink voucher with your entry.

The show format follows the usual Japanese pattern, with six performers interspersed with photo opportunities. On my visit, all performers were stunners, though the photos were all “cute” type – nothing explicit allowed (though the show itself was as explicit as you like). The seats are comfortable and have easy access.

Toyo-Show has one variation from other Japanese strip shows – they clear the theatre after every show (ie, 3 times per day) so that nobody can hog the best seats all day, and you have to queue up to re-enter and claim a seat. Fine in theory – but what actually happens is that the biggest seat-hogs race out of the theatre at the finale of each show to be first in the re-entry queue, so most people get the same seats they had already. (But since they clear both people and belongings, seat-hogs don’t get the chance to put their things on an adjacent seat to give themselves more elbow room.)

To get there: head for Tenma station on the JR Osaka Loop Line. Exit on the McDonald’s side. You will see 3 alleyways; take the centre (covered) alleyway for a couple of blocks till you come to a Family Mart. Turn right; Toyo-Show is at the second intersection on the left – blue frontage and blue canvas awnings. There was no tout when I visited – just walk in, go upstairs and pay.